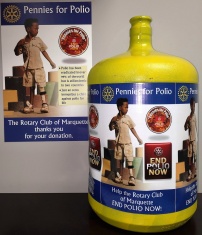 Annually, our Club raises funds and awareness for polio eradication by placing yellow donation jugs at local businesses around Marquette.  We begin in the middle of September and keep the jugs out until World Polio Day in October. In 2015, we raised over $2,700 through the campaign and in 2016 we raised over $3,000! Through 2018, all donations towards polio eradication given to the Rotary Foundation will be matched 2:1 by the Bill and Melinda Gates Foundation.

Rotary’s involvement in polio eradication started with a successful pilot project to immunize children in the Philippines in 1979. Since then Rotary members have donated time and money to help immunize more than 2.5 billion children in 122 countries.

Pakistan and Afghanistan are the only remaining polio-endemic countries, with a total of 23 cases reported thus far in 2016.  These countries have challenges to eradicating the disease due to conflict, political instability, hard-to-reach populations and poor infrastructure.  Once a country is deemed polio-free, ongoing monitoring is required to maintain that status.